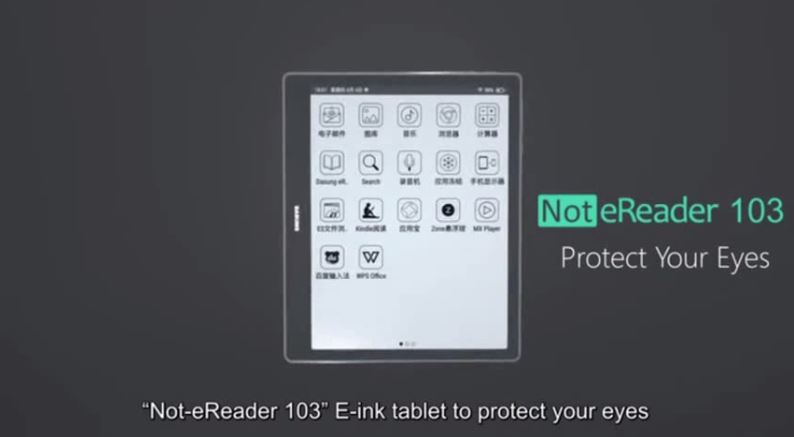 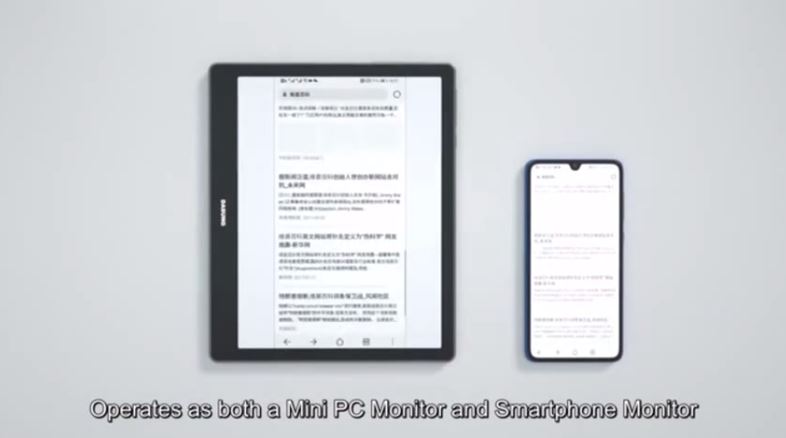 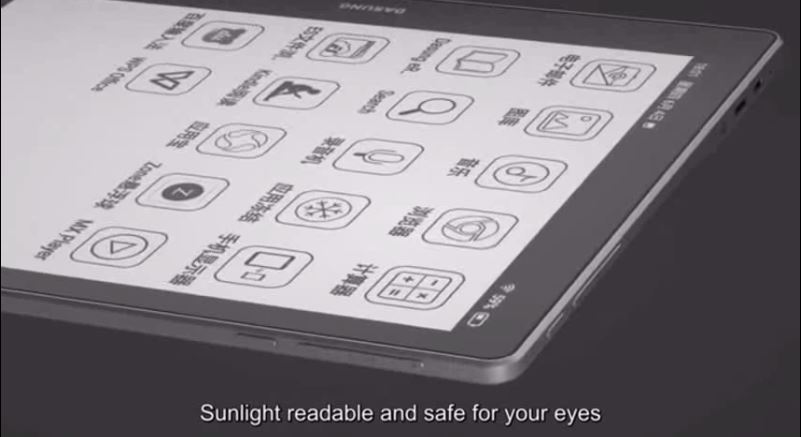 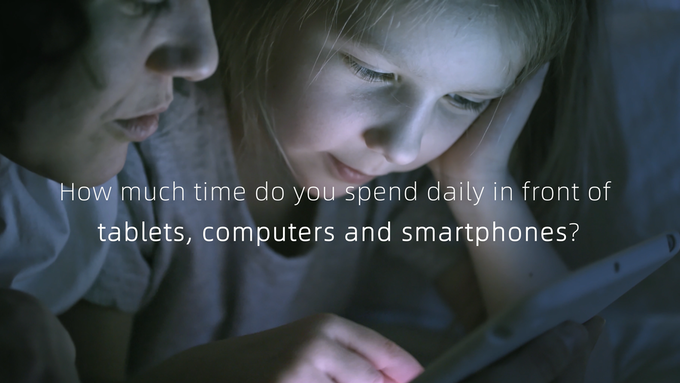 According to the first world report on vision issued by WHO, at least 2.2 billion people have a vision impairment or blindness, of which over 1 billion cases could have been prevented or have yet to be addressed. Among them, staring at the tablet / computer / smartphone for a long time is the major cause of eye damage. The strong light stimulation, blue light, and strobing of the traditional LCD light-emitting screens can easily make our eyes fatigued even causing lesions that lead to irreversible damage.

"Not-eReader 103" implements ambient light-reflective E-ink technology, which has been widely used in e-readers such as Kindle, boasting high reflectivity, wide viewing angle, high contrast, high resolution and visibility. “Not-eReader 103” displays like a printed newspaper, yet features the mobility of a screen, which solves the troubles caused by strong light and strobing. It is the perfect E-ink tablet which allows you to stave off  damage to your eyes caused by LCD screens while working, studying and being used for  entertainment purposes.

·        "Not-eReader103" implements reflective ambient light E-ink display, like real paper, staves you off the damage to your eyes caused by the LCD screens of tablet, computer and smartphone.

·        "Not-eReader103" is just like a large size Kindle with more functions. It's not only an e-Reader but also an open Android tablet. No longer limited to Kindle bookstore reading, you can install more Apps for reading, social, learning and office use, such as Office, Twitter, Facebook, Youtube , LinkedIn, Yelp, etc.

·        "Not-eReader103" has the fastest refresh speed and lower latency among other E-ink devices. Staving your off the suffering of the black flashing and lagging of Kindle. You can smoothly play cartoons and online lessons for kids with it.

DASUNG takes care of the eyes of people in the information age and focuses on the development of special display terminals based on E-ink technology (E-paper). In December 2014, we released the world's first 13.3” E-ink monitor Paperlike, and was invited to participate in the 2015 CES in the United States. In 2019, we released 7.8" E-ink tablet "Not-eReader". So far, we have got more than 160 media coverage in over 20 languages. DASUNG has users from 70 countries and regions around the world. 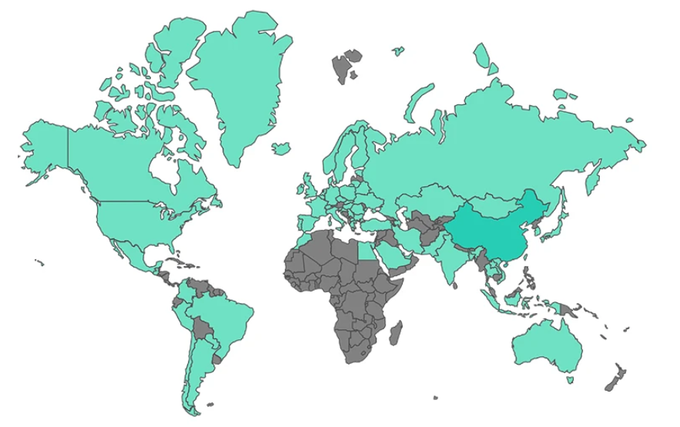 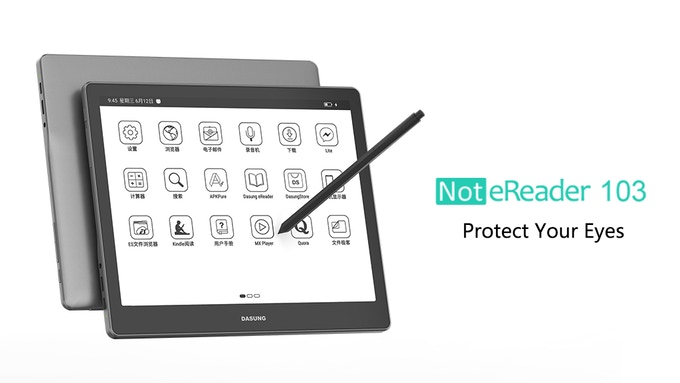 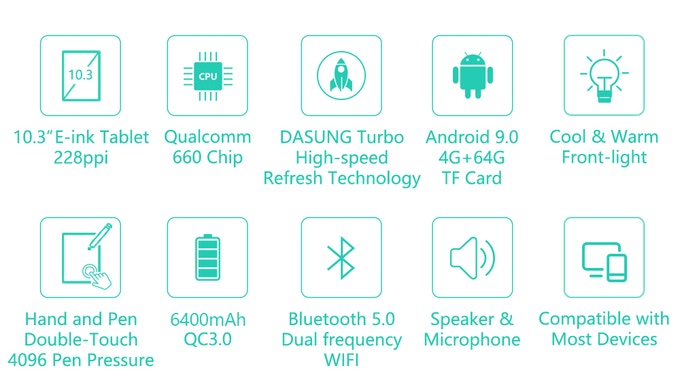 Used as a tablet, you can use multiple Apps anytime, anywhere! Display like painted paper. Watch online courses and videos. Connected to a computer with HDMI interface. You can smoothly browse websites, edit documents, write codes, read PDF, edit spreadsheets, watch lecture, videos and track stocks. It supports mirror＆extended display, freely switch between horizontal＆vertical screens which satisfy all your demands of working, studying and for entertainment purposes. Under Windows system, you can use touch screen function to operate your computer, very convenient. 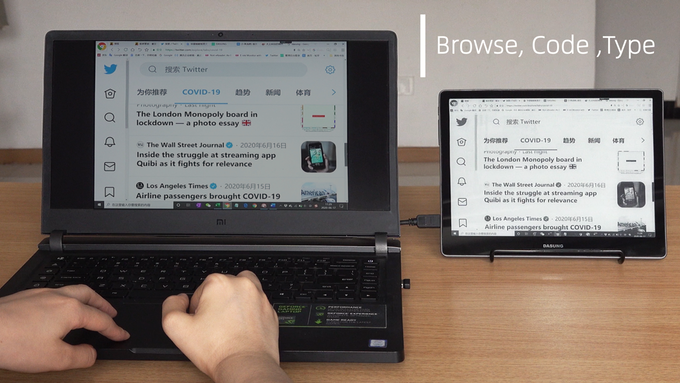 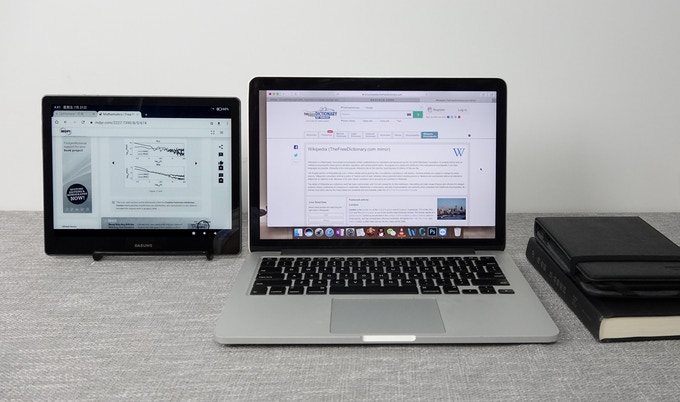 Connected to smartphones with cables or through WiFi and Bluetooth.Crafty-designed as a smartphone monitor, you can browse contents on your smartphone. Android phones support reverse touch screen, which means you can directly operate your smartphone on the "Not-eReader103" screen.

For Android phones, you need to use the corresponding HDMI female adapter. iPhones are not compatible with this function.

Connected to Not-eReader 103 through WiFi and Bluetooth. 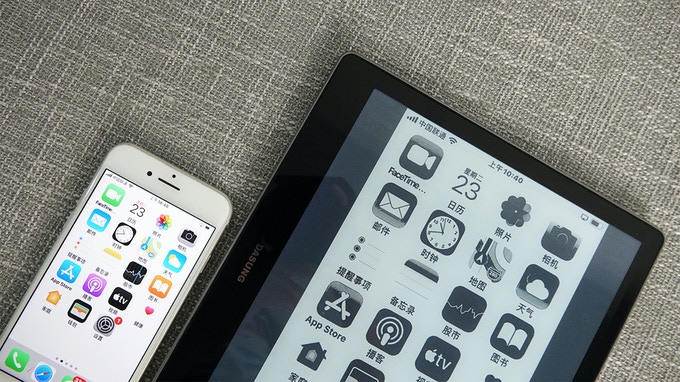 "Not-eReader 103" features a 10.3  inch E-ink capacitive touchscreen display with a resolution of 1872*1404 pixels at 228 PPI. With high contrast clear retina screen, the display effect is clearer and sharper. The traditional e-reader is plagued by the problem of slow refresh speed, black flashing, and lagging. Our self-developed DASUNG Turbo high-speed refresh technology has solved this problem. Almost no Latency. 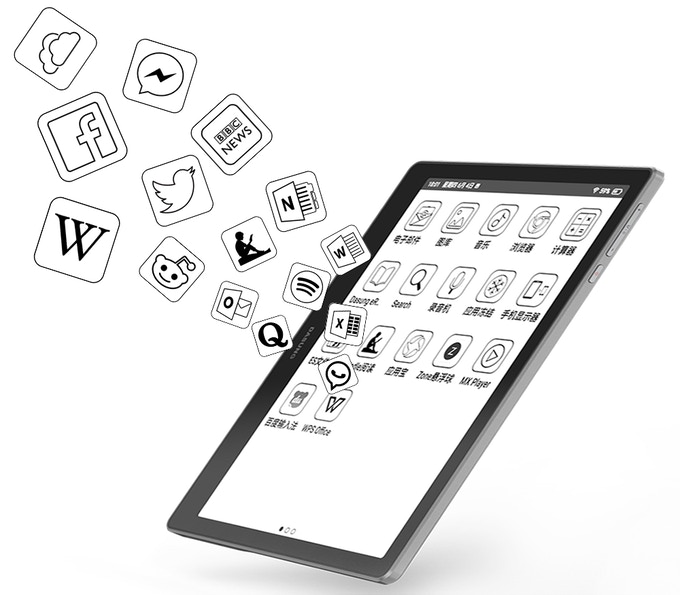 For handwritten version tablet, you can directly use fingers or stylus to operate the tablet. 4096 Pen Pressure, high precision, and precise pressure sensor.  Immediate response to drawing, taking notes, or marking documents.You can take notes at any time!

Tips： You need to install and download Apps that support handwriting, such as OneNote, Office 365, etc. Different Apps may have different handwriting experience.

We also have non-handwritten version tablet to meet your different needs. 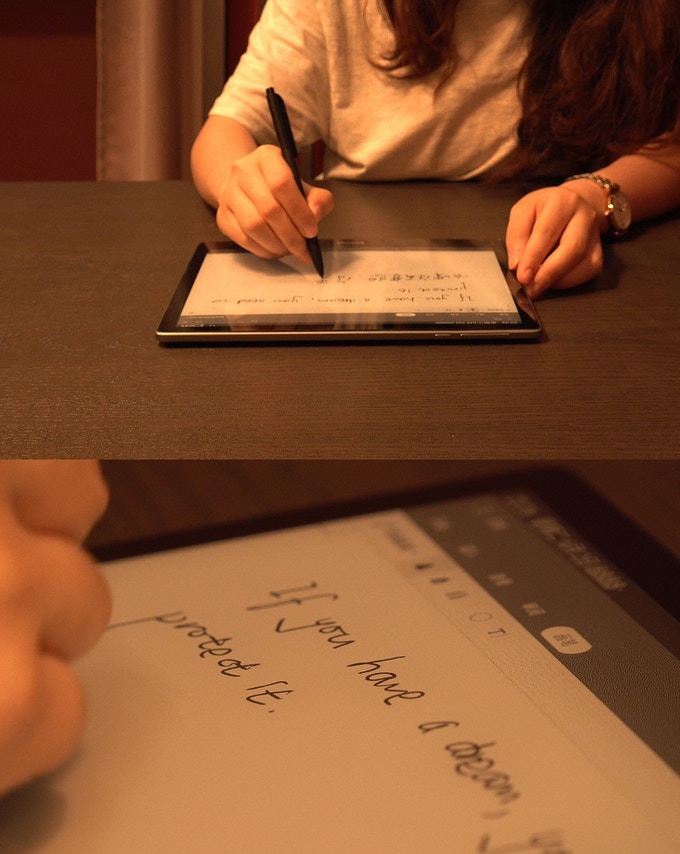 Features front light, illuminating LED light running parallel to the device from the side. The light guide plate attached to the surface of the screen ensures the light illuminates the E-ink screen, and the light will not directly shine into your eyes. Protecting eyes to the fullest while achieving the fill light effect. Switch between cool and warm light freely, adjustable front light brightness, the front light can also be turned off completely. 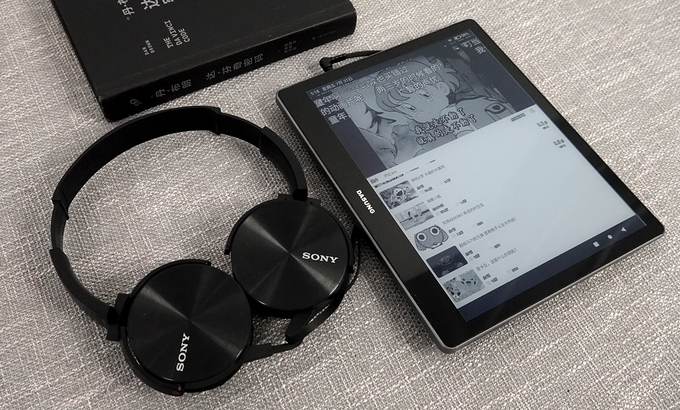 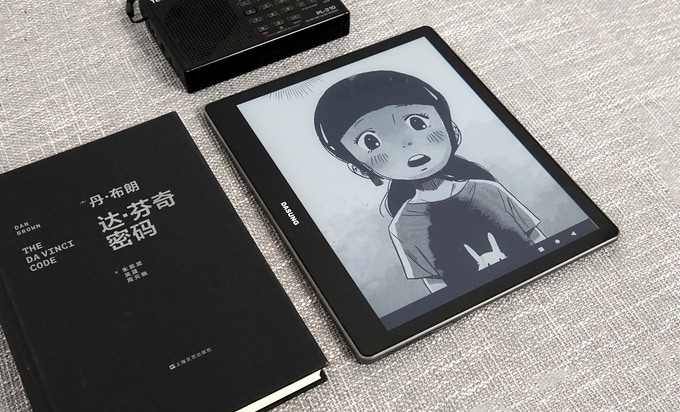 Through the cross adjustment of the three dimensions of “grayscale,” “ink drop blackness” and “contrast”, the speed and image quality can be optimized, which can meet your different needs in the office, for entertainment and learning in order to protect your eyes well. You can personalize it by selecting the appropriate image quality to achieve the extraordinary effect of better speed, better image quality and better operation. 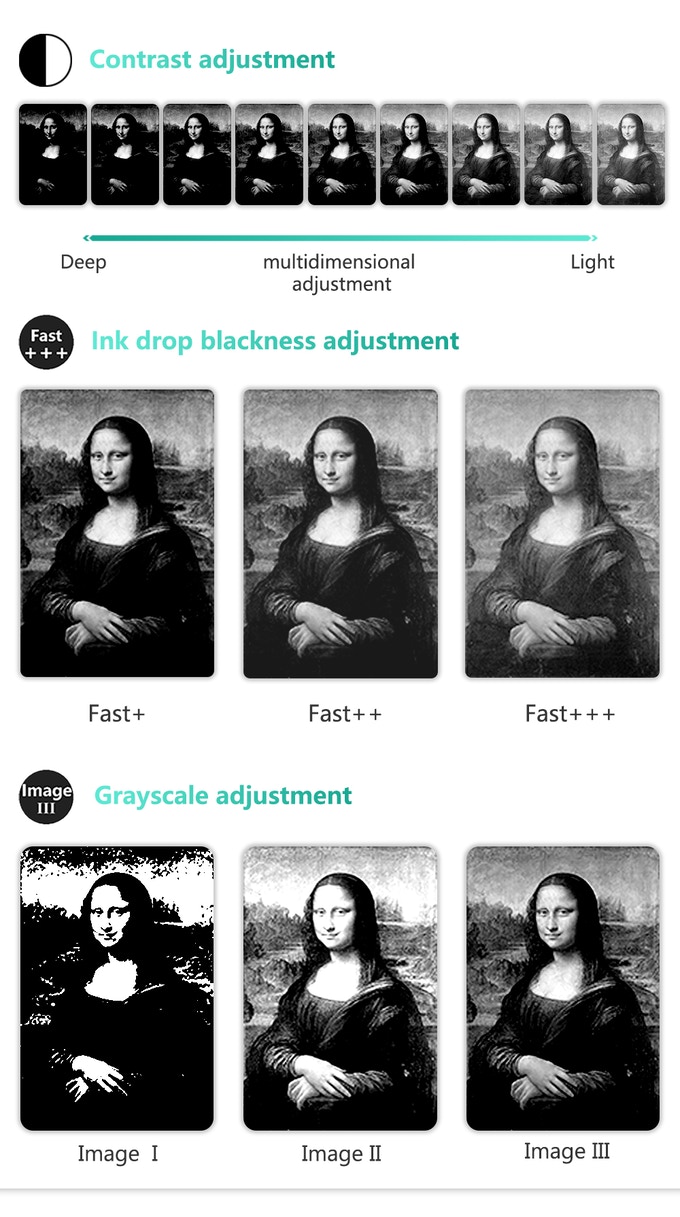 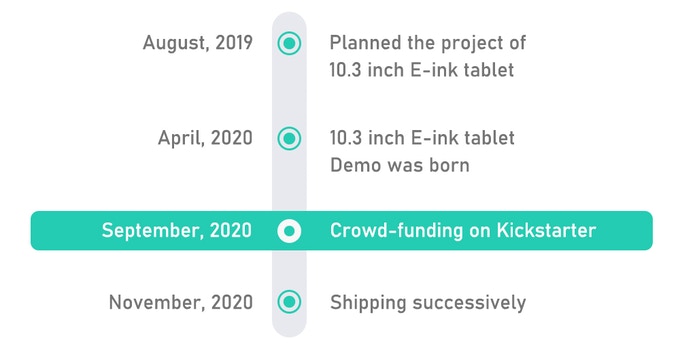 We are glad to offer refund if you are confronted with serious issues. We cannot accept refunds for other reasons, because the two-way shipment and customs fees are very high and there might be unpredictable situations during shipping which causes high cost. That's the reason why we strongly recommend you to carefully evaluate before purchasing. Thank you!

·        Does it support capacitive pen in computer monitor mode?

·        Which brand of smartphone can be mirrored on the tablet?

iPhone is not compatible with wired cable connection, but it can be connected wirelessly via Airplay to mirror the iPhone screen to display.

Reason: iPhone does not support external output of touch screen signals, so it's not compatible with touch screen function.

In addition, a computer with VGA interface is not compatible with "Not-eReader 103", even if you use an adaptor.

It has been a fulfilling but challenging journey for us to develop “Not-eReader 103”. We have successfully completed the R&D development and prototyping. The plan is to start molding immediately after campaign. We have established good connection with trustworthy and reliable partners. We are more experienced and confident than we were before. If you have any suggestion or feedback, feel free to reach us at contact@dasung.com

We have chosen the highest quality electronics in the market. We have tested a large range of electronics, and ensured that the components chosen to build "Not-eReader103" have survived.

We have made sure that the factory that we are working with are all abiding by the rules and regulations of the government to ensure that all waste is either recycled or disposed offcorrectly.