The new PocketBook Era is an eBook reader with a 7 inch, 1264 x 1680 pixel E Ink Carta 1200  display, a frontlight with adjustable color temperatures, and a 1,700 mAh (6.29 Wh) battery. It’s a waterproof device with an IPX8 rating. And it’s got one feature that’s increasingly uncommon in the eReader space: a built-in speaker.

That means you can use this eReader to listen to music or audiobooks without connecting headphones or an external speaker. And since PocketBook’s software supports text-to-speech, you can even listen to books that aren’t professionally narrated (if you can live with robotic sounding voices). First unveiled in June, the PocketBook ERA is now available for purchase for $199 and up. 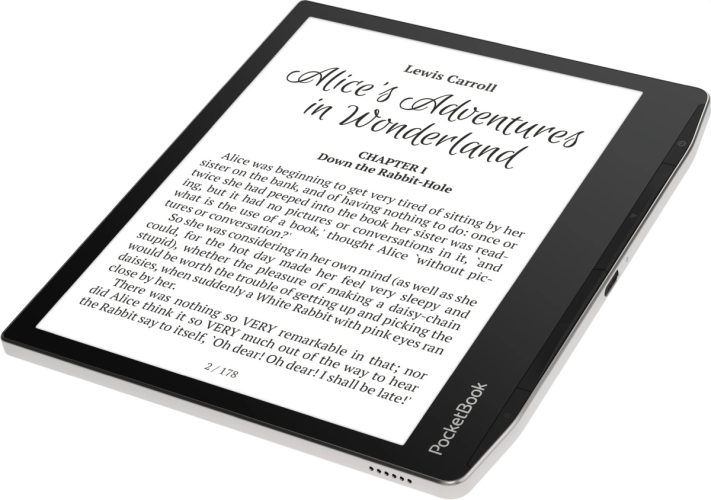 The starting price is for a model with 16GB of storage, but you can also pay $249 for a 64GB model if you plan to store a lot of eBooks or audiobooks on the device.

Prior to launch, the PocketBook Era showed up at the FCC website, which has documents including the user manual and some internal photos that provide additional details abotu the eReader.

For example, we already knew the device would have 1GB of RAM, at least 16GB of storage, and a dual-core processor. Now we know which processor. It’s an Allwinner B288 chip, which is an ARM Cortex-A7 processor designed for low-power E Ink devices. 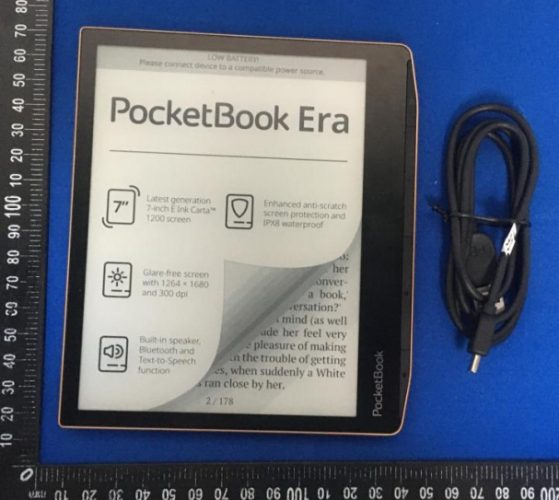 While it you don’t exactly need a super-speedy chip in a device that’s primarily designed for reading eBooks, this processor has a few disappointing limitations. Wireless connectivity is limited to Bluetooth 4.0 and 2.4 GHz single-band 802.11b/g/n (WiFi 4), for example. And the PocketBook Era’s USB Type-C port only supports USB 2.0 speeds.

While the processor and connectivity are a little disappointing, the Era does have a few other nice features including a G-sensor that enables automatic screen rotation, a cover sensor that should allow the device to go to sleep when you cover the display, support for a wide variety of audio, image, and eBook formats (including eBooks with Adobe DRM), and a choice of 16GB or 64GB of storage. 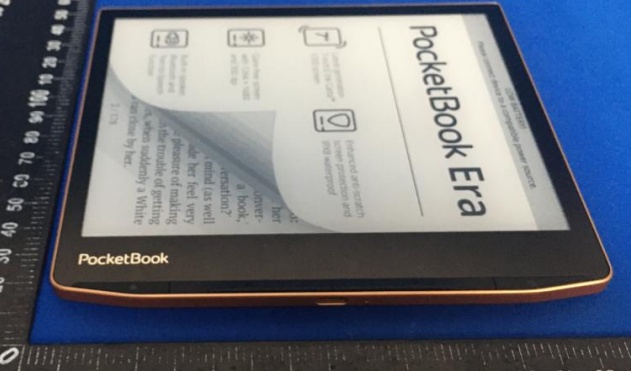 It also has a side-grip design with physical page turn buttons along one side, much like Amazon’s Kindle Oasis.

The built-in 0.8 watt speaker probably isn’t going to be amazing for listening to music, but it should allow you to listen to audiobooks without headphones. While that’s not entirely a unique feature, it’s something that Amazon hasn’t included in a Kindle eReader since releasing the Kindle Touch in 2011. PocketBook says its text-to-speech software works with 26 supported languages.

The PocketBook Era also has a 3.5mm headphone jack which you can use for wired headphones or speakers, as well as support for Bluetooth audio devices.