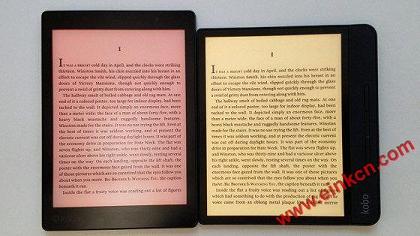 Now that Kobo has released the Kobo Forma, they have two premium ebook readers to choose from with larger screens, the other being the Kobo Aura One.

Both devices are about 90% the same as far as features and specs are concerned.

The Kobo Forma has a new design with page buttons, and it has a sensor to automatically rotate the screen.

It uses an 8-inch E Ink screen and the Aura One has an 7.8-inch screen.

Consequently the Kobo Forma weighs 33 grams less than the Aura One (197 grams vs 230 grams).

Both are waterproof (IPX8 rated) and both have the same amount of storage space. Overall performance seems largely the same between both of them.

One notable advantage for the Kobo Forma is a better touchscreen. The Aura One’s touchscreen accuracy is slightly off. It’s not a big deal but it requires tapping things more than once sometimes.

The software features are mostly the same on both devices. The Forma adds a couple of new features but Kobo will probably add them to the Aura One with a future firmware update, making this part of the comparison irrelevant.

First, they added a full page option to the Forma so you can remove the header and/or footer from appearing. Second, they finally added the option to read ebooks in landscape mode. They also made it so paging forward goes down the page of a PDF in landscape mode instead of going to the next page.

Aside from the design, the main difference between the two is the color of their frontlights. They have completely different colors at both ends of the lighting spectrums.

The Forma’s light is also a lot dimmer at the lower settings.

Both frontlights have flaws. The Kobo Forma has a darker area along the side with the buttons, which gives it a gradient look, and you can also see some PWM flicker in the video but you can’t see it in person.

The Aura One’s frontlight has more shadowy areas at the bottom of the screen, and it also has a subtle gradient but it goes from top to bottom so it’s a little less distracting to the eye.

Frontlights can vary a lot from one to the next, however, and Kobo might be using different color LEDs in the Aura One these days than the one I got over 2 years ago, so consider this more of a general guideline than something that’s set in stone.

One difference with the Aura One is it has a sensor to automatically adjust the frontlight brightness based on ambient lighting conditions.

I once considered the Kobo Aura One my favorite ebook reader. Some new rival ereaders have come along since then but the Aura One is still an exceptional reading device, and since ereader technology evolves so slowly it’s not outdated even though it’s over 2 years old now.