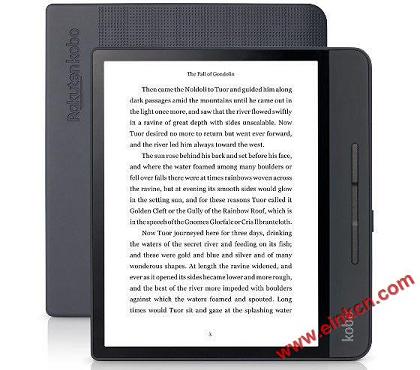 The new 8-inch Kobo Forma was released last week, and unfortunately it looks like it’s suffering from some quality control issues in regards to the frontlight.

In the Kobo Forma vs Kindle Oasis comparison review, I mentioned how the frontlight on the Kobo Forma has a gradient issue where it appears brighter on one side of the screen than the other. The side with the buttons has a dark strip that runs down the screen.

To me it’s not nearly as noticeable in landscape mode because then the dark strip is hidden away in the footer instead of at the end of every line.

LED frontlights are usually at the bottom of the screen instead of the side where it makes imperfections seem more noticeable.

Frontlight shadows and subtle color gradients aren’t at all unusual when it comes to frontlights, but the Kobo Forma’s frontlight is suffering from a flickering issue as well.

You can’t see the frontlight flicker with the naked eye (not unless you’re really sensitive it), but you can see it in videos.

The flickering might cause headaches and eye strain for some people that are sensitive to that kind of thing.

I noticed the unusual flickering when I was doing the video reviews for the Kobo Forma, and then I saw the YouTube video posted below talking about the issue as well, which is referred to as pulse width modulation. The video was taken using slow motion to capture the flickering effect, but I can see it without using slow motion at times in my Kobo Forma video review (which I’ll be posting tomorrow).

In addition to the screen flickering, you can see the dark strip issue in the video as well, especially toward the end of the video when the brightness is turned up. The side with the buttons clearly has a darker area that goes down the side of the screen, and the frontlight is noticeably brighter on the opposite side. That gives it a gradient look that goes across the screen that can be distracting to the eye while reading.

Hopefully Kobo gets these frontlight issues figured out because the Kobo Forma is a really nice larger-screen ereader otherwise, but at $279 for a dedicated ebook reader you’d expect it not to have these problems.