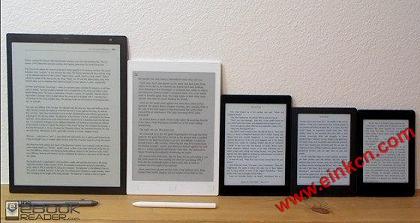 In recent years there have been a number of ebook readers with larger screens becoming available, everything from 7-inches to 13.3-inches.

Kobo was one of the first to embrace the idea of larger screens when they first released the 7.8-inch Kobo Aura One in 2016. Since then they’ve released the 8-inch Kobo Forma and the 7-inch Kobo Libra.

Earlier this year Barnes and Noble released the first Nook to have a 7.8-inch screen with the Glowlight Plus. Up until then all E Ink Nooks have had 6-inch screens only.

Amazon finally released a 7-inch Kindle in 2017 with the 2nd gen Kindle Oasis after seven years of only releasing 6-inch Kindles. I still think they really need to add a 10-inch model like the old Kindle DX but that has yet to happen.

Onyx has several larger ereaders available from 7.8-inches to 13.3-inches with the Nova, Note, and Max models.

Boyue has the 7.8-inch Likebook Mars and the 10.3-inch Likebook Mimas and Alita. Pocketbook has the InkPad 3. Even Sony got back into the game with their 10.3-inch and 13.3-inch Digital Paper Devices.

I still think there would be a market for smaller pocketable ereaders too with 4″-5″ screens, but smaller ebook readers are almost non-existent in 2019. There are a few phones with smaller E Ink screens but there haven’t been any ebook readers with smaller screens since the Kobo Mini was released way back in 2012.

But at least there’s finally a variety of ebook readers with larger screen sizes. Hopefully that trend continues. Check out this earlier video for a screen size comparison if you’d like to see how the different screens compare.